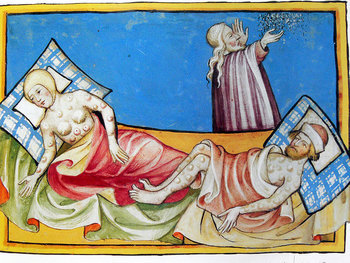 "When will posterity believe this to have been a time in which nearly the whole world—not just this or that part of the earth—is bereft of inhabitants, without there having occurred a conflagration in the heavens or on land, without wars or other visible disasters? When at any time has such a thing been seen or spoken of? Has what happened in these years ever been read about: empty houses, derelict cities, ruined estates, fields strewn with cadavers, a horrible and vast solitude encompassing the whole world? Consult historians, they are silent; ask physicians, they are stupefied; seek the answer from philosophers, they shrug their shoulders, furrow their brows, and with fingers pressed against their lips, bid you be silent. Will posterity believe these things, when we who have seen it can scarcely believe it, thinking it a dream except that we are awake and see these things with our open eyes, and when we know that what we bemoan is absolutely true, as in a city fully lit by the torches of its funeral we head for home, finding our longed-for security in its emptiness? O happy people of the next generation, who will not know these miseries and most probably will reckon our testimony as a fable."
— Petrarch, Letters on Familiar Matters (1349)
Advertisement:

, originating from Central Asia, has caused some of the deadliest pandemics in human history, peaking in Europe between 1346 and 1353 in the Great Pestilence with strains continuing until the 1700s. Both the event and the disease are also known by the name given by later writers, the Black Death. Experienced by the whole of Eurasian/Mediterranean civilization to some degree, it so traumatized the human race that the formal name the disease was given in Europe, derived from the Latin words for to strike down, and to lamentnote plaga and plangere respectively, is to this day synonymous with both "widespread threat to society" and "lethal contagious disease": The Plague. It's believed that an outright majority of Europe and Asia's population was killed by this outbreak. In terms of absolute numbers, with anywhere between 75 million and 200 million deaths, it was the absolute deadliest pandemic ever recorded and proportionally the single deadliest event in recorded history.

Keep in mind that the disease is not called the "bubonic plague"; it's simply "plague". "Bubonic" is merely one way the disease plays out: by infecting the lymph system and colonizing the lymph nodes, which swell up into "bubos". In coastal areas, the most common form of plague at that time was pneumonic plague, which affects the lungs. Septicemic plague affects the bloodstream. The difference? Pneumonic plague kills all but a handful of sufferers, mostly within a week of the first symptoms. Septicemic plague is always fatal and can kill within hours of the first symptoms appearing, and may even kill before any symptoms occur. note Even with the prompt intervention of modern medicine, the survival rate only goes up to 15%. Bubonic plague victims, on the other hand, can take days or even weeks to die, and around one-third actually survive with long lasting traumatic damage to their internal organs and immune systems- with the effect of making these victims the most noticeable and horrifying.

The disturbing explanation for the disease's alternate name, the black death, is that in both the septisemic and bubonic presentations, the victims are left in a horrific swollen and decaying state due to a combination of ruptured lymph nodes and frostbite-like patches of black gangrene —before they die. Following the plague pandemic, this image was so burned into Europe's psyche that it spawned our modern visualization of The Undead, a stark contrast to the prior depictions of liches and kin as unusually pale but otherwise unremarkable, animalistic, or totally skeletal.

There have been many other outbreaks of plague other than the 1348-1350 pandemic. The most recent occurred at the beginning of the 20th century, killing tens of millions in India and China, and the earliest outbreak for which we have definitive historical evidence (at least according to some historians) is The Plague of Justinian in the 6th Century. The growing use of antibiotics, the invention of vaccines centuries later, and the improvement of hygiene conditions have ensured that no plague pandemic of such scale can happen anymore in most modern countries, but there are still limited outbreaks in the areas where there's a lack of these.

One of the things that made the plague so horrible is that there wasn't any escape. Most diseases spread from person to person and thus hit urban areas far harder than rural. People seeking to escape an epidemic could flee to the countryside. However, yersinia pestis is carried by rats, and rats are territorial such that their population density was uniform in medieval Europe and the plague was likewise uniform. Where other diseases were epidemic and the superstitious could blame them on moral decay in urban centers, the black death was pandemic and it could only have felt like the entire world was being condemned by heaven.

When this appears in a story you know things are quickly going to go downhill for the heroes (if there even are heroes). Due to its transcending memories of death, destruction, and desperation, such stories generally have a Downer Ending. It tends to be used because to most cultures, death is feared and a reminder of our own mortality is chilling.

Compare: The Spanish Flu and the COVID-19 Pandemic.

See also The Plague for devastating pandemics in general. For more on the science and history of the plague, see the Other Wiki.