Film / Panic in the Streets 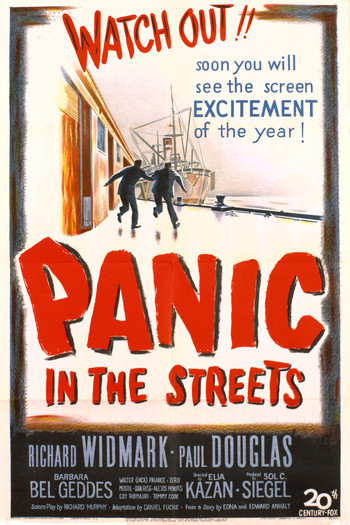 A man named Kochak, a hoodlum who has illegally entered the United States aboard a tramp steamer, has been in the country — specifically, New Orleans — for only a matter of hours. He has already found an illicit poker game, lured there by his duplicitous cousin Poldi. Kochak is up $190 at the poker game when, suffering from flu-like symptoms, he tries to leave. Unfortunately for Kochak it isn't the sort of poker game you're allowed to leave with money in your pocket, so Blackie, the seething psychopath in charge of the game, sends Poldi and his other flunky Fitch (Mostel) after Kochak. When Kochak pulls a knife, Blackie shoots him to death.

It turns out that for Kochak, it didn't matter. The authorities pick up his corpse and take it to the morgue, and discover terrifying news: Kochak was suffering from pneumonic plague, a highly communicable and nearly 100% lethal illness. The bullets only shortened his life by about 12 hours. More importantly, Lt. Commander Clinton Reed of the U.S. Public Health Service (Widmark) realizes that pneumonic plague may be on the loose in New Orleans. A seemingly unimportant gangland slaying suddenly becomes hugely important as Reed goes on a desperate hunt for Kochak's murderers, before they spread the plague all over the city.

Film debut for Palance, who would go on to play many more psychos and murderers over a long career. Alfred Newman composed the music.

See also The Killer That Stalked New York, another film from the same year about a disease outbreak in a U.S. city, this time smallpox in New York City.