Film / Isle of the Dead 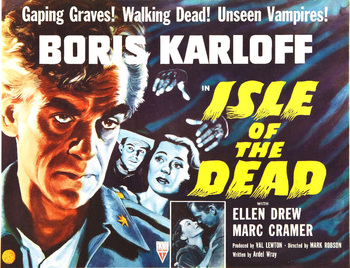 Isle of the Dead is a 1945 horror film directed by Mark Robson, and produced by the master of 1940s horror, Val Lewton.

It is set in 1912 during the First Balkan War

Looking for the culprits behind the vandalized tomb, he finds on the island an archaeologist, Dr. Albrecht, and Albrecht's housekeeper, Madame Kira. Also on the island are several guests of Albrecht: Mr. and Mrs. St. Aubyn, the husband being an English diplomat; Thea, a caretaker for the frail Mrs. St. Aubyn; Dr. Dossos, whose status as a medical doctor becomes important; and Andrew Robbins, an English tinsmith.

Robbins falls ill at dinner and by the morning is dead. Dr. Dossos comes up with a terrifying diagnosis: Robbins has caught The Plague, namely septicemic plague, the worst kind. The entire island is placed under quarantine. Madame Kira, a superstitious old peasant, blames everything on Thea, whom Kira claims is the host for a vorvolaka, a Greek evil spirit roughly analogous to a vampire.