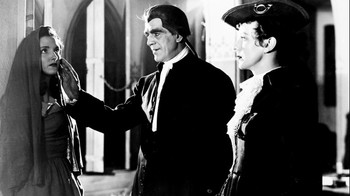 Bedlam is a 1946 horror film directed by Mark Robson, starring Boris Karloff, produced and co-written by the master of 1940s horror, Val Lewton.

hospital, the oldest continually operating mental institution in the world, more popularly known as "Bedlam." Karloff plays George Sims, the master of Bedlam. Sims is a cruel and vicious man who beats and starves his inmates and locks them in cages. He also treats them as zoo animals, putting them on exhibit for anyone who forks over two pence.

One of the people who pays tuppence to see the inmates of Bedlam is Nell Bowen (Anna Lee), an actress and paid companion of Lord Mortimer, a patron of Bedlam House. Nell is shocked by the abuse suffered by the inmates of Bedlam, and repulsed by the oily Sims, who sucks up to Lord Mortimer and arranges for his mental patients to put on a show for Mortimer's amusement. She resolves to reform Bedlam, which makes an enemy of Sims. When she insults Lord Mortimer for his chumminess with Sims, she makes an enemy of him as well, and the two of them conspire to have Nell committed to Bedlam as a patient.

Third and last collaboration between Karloff and Lewton. Not to be confused with television series Bedlam.