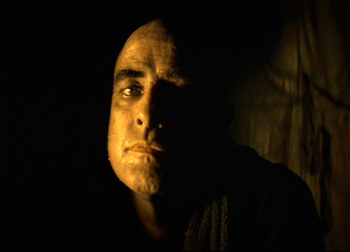 "He was dark, too. I don't mean dark-skinned. No, this was different. It was as if he was always walking in a shadow. I mean every step he took towards the light, just when you thought his face was about to be revealed, it wasn't. It was as if the lights... dimmed... just for him."
— Steve Buscemi, in the opening scene of

A face half-covered by shadow, very often through a partial Lightning Reveal. Good way to emphasize a character's sinister side, or to temporarily hide that one side of their face is vastly abnormal. This can overlap with Hidden Eyes. Sometimes accompanied by having the eye on the obscured side of the face glow ominously.

Not to be confused with The Faceless, who requires full coverage of shadow all of the time.

Often called Chiaroscuro, because it uses the more general chiaroscuro effect. May be called Rembrandt lighting, because Rembrandt used it, a lot.

Stark chiaroscuro such as this is technically known as Tenebrism.

Compare Emerging from the Shadows and Sinister Silhouettes.