Comic Book / The Life and Times of Scrooge McDuck 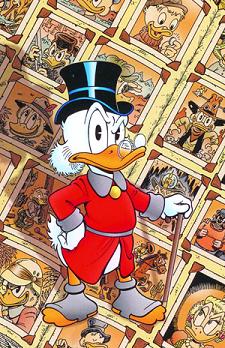 I made my fortune by being tougher than the toughies and smarter than the smarties. And I made it square!
"The quality of your lives depends on what you make of them! The only limits to adventure are the limits of your imagination!"
— Scrooge McDuck, The Richest Duck in the World
Advertisement:

The saga begins when Scrooge is ten years old in 1877 and ends with meeting his nephew Donald Duck at the time of his premiere story in Christmas 1947. In-between, the series tells the story of how a poor lad from Scotland traveled the globe building up a fortune and financial empire by being smarter than the smarties and tougher than the toughies to become the richest man in the world, having every possible adventure a Self-Made Man could find. The series gives us our best look at Scrooge's family — his parents, uncles, and sisters — and shows how he met enemies like Flintheart Glomgold and the Beagle Boys, friends like Theodore Roosevelt, and Mentors like Howard Rockerduck that helped mold him into the Anti-Hero Jerk with a Heart of Gold we've known him as. The epic is packed with Character Development, adventure, Continuity Nods, Leaning on the Fourth Wall, a miraculous amount of violence and innuendo that got past the radar, and of course Don Rosa's trademark Scenery Porn and insane amount of historical, geographical, and cultural research.

The 12 original chapters were released in issues of Uncle Scrooge from April 1994 through February 1996. They were published together in an anthology in June 2005. In the spirit of Disney's love of midquels, in September 2006, Gemstone released The Life and Times of Scrooge McDuck Companion, which turned 7 of Don Rosa's previously published Uncle Scrooge stories (and 1 brand new story) into Midquels since they were Flashbacks about more adventures from Scrooge's glory days... essentially Arc Welding within Arc Welding. Most of the midquels use a Framing Device of Donald, Huey, Dewey, and Louie unearthing Scrooge's trunk of memorabilia in his money bin and asking questions about the stories behind its contents, prompting said flashbacks.

Most of the stories (including the midquels) were released in Europe before appearing in the American Uncle Scrooge series; for example, the original twelve chapters appeared in countries including Denmark, Germany, and Norway in 1992. The release dates given below give the first publication and then its American equivalent.

This work earned Don Rosa the Will Eisner Comic Industry Award in 1995 for "Best Serialized Story".

based on the book by Tuomas Holopainen, simply titled Music Inspired By The Life and Times of Scrooge, was released in April 2014.

Tropes across the series: