Comic Book / A Letter from Home 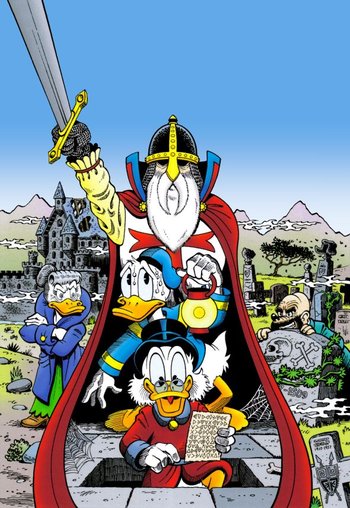 A Letter From Home, also known as The Old Castle's Other Secret, and its companion story, The Crown Of The Crusader Kings, is a two part epic Disney Ducks Comic Universe story, made by Don Rosa and published in 2004, and, along with The Life and Times of Scrooge McDuck and Guardians of the Lost Library, considered his magnum opus.

In The Crown of The Crusader Kings, Scrooge learns that the location of the eponymous crown, made by all the wealthiest gems in medieval Europe, and the western counterpart to the crown of Genghis Khan, which he previously lost in the Don Rosa story Return To Xanadu, can be found in the diary of Christopher Columbus, which was lost during his return trip. Scrooge remembers that he knows the location of the diary, as it belonged to Swedish/Finnish polar explorer Adolf Erik Nordenskiöld, whom Scrooge purchased an Australian map from in 1892, when Nordenskiöld offhandedly stated he lost it while exploring the northern part of Brutopia.

After retrieving the book in Brutopia, Scrooge and his nephews head to Paris, where they meet with two representatives of The International Money Council — Maurice Mattressface, whom they previously ran into in the Carl Barks story The Fabulous Philosopher's Stone, and his superior, Monsieur Molay. Molay accompanies them to Haiti, where Columbus' flagship Santa Maria had capsized while he was trying to deliver the crown to the Emperor of Mongolia, on behalf of the Templars, in order to hide it from the wrath of the French king. Here, they find that an abandoned anchor on a hilltop is the clue to locating the crown, as watching through the anchor's eye on Christmas Day reveals the true position. However, Molay betrays them and tricks them into searching an entire valley for the crown, finding nothing. He then takes the crown for himself, but one of the nephews reveals that, due to the calendar change, the date, on which the Knights Templar, actually the International Money Council, obtained ownership of the crown never existed. Molay tries shooting them but is subdued by a Haitian priest, who then takes the crown for a local museum.

In A Letter From Home, Scrooge notices that the pattern on the cloth used to cover the crown was the tartan of the Clan of McDuck, meaning a member of the family had hid the crown on behalf of the Knights Templar, which would mean the rest of the grand treasure was most likely hidden by a McDuck. Scrooge and his nephews return to Castle McDuck in Scotland, where they come face to face with his younger sister Matilda McDuck, who abandoned him after the events of The Life and Times of Scrooge McDuck. Molay escapes from his imprisonment, steals the crown, and heads to Scotland with Maurice. As Scrooge works his way down the clues to the treasure, he also has to confront his family issues with Matilda. Eventually, Molay kidnaps her to use her as a bargaining object to Scrooge, Maurice betrays him, realizing he is evil, and Molay reveals his allegience to the Priory of Sion, an evil faction of the Knights Templars.

Molay reaches the central chamber under the castle, along with the ducks, and they realize that the crown is the key to the treasure. Molay forces them to unlock the treasure chamber at gunpoint, but the timely intervention of Maurice allows Donald to defeat him. Subsequently, they unlock the treasure chamber, and Matilda finds a small box, hidden above the chamber, left by their father, Fergus. In it, Fergus reveals that he had always understood Scrooge's obsession with adventure and knows that he values hard work, not money in itself. Scrooge gets the right to administer the treasure, while Molay is arrested, and Scrooge reconciles with Matilda.

Tropes used in Crown of the Crusader Kings, and A Letter From Home: