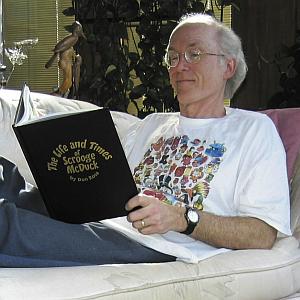 Up until his retirement, he had executive power over the Duck family canon, and brought the world some seriously great Arc Welding in the process.

He grew up as a fan of the Donald Duck comics made by Carl Barks. When he grew older he submitted self drawn comics to Donald Duck fanzines, as well as letters to some debates. He even corresponded with Carl Barks from time to time. Eventually he quit being a hardcore fan, but he never quit being a fan of Carl Barks. Years later a new Donald Duck publication arrived, and Don Rosa applied for the job as an artist. He wrote a letter there he told how much he wanted to be the artist, that he would write the stories in the spirit of Carl Barks and that he was born to make it. (Indeed, in the 1970s and 80s Rosa had done two comics for newspapers in his hometown of Louisville, The Pertwillaby Papers and The Adventures of Captain Kentucky. He later reused several Pertwillaby storylines for his Scrooge stories.)

Rosa is known for his quirky drawing style and epic storylines, best exemplified by The Life and Times of Scrooge McDuck. Since Uncle Scrooge is his favorite character, Rosa's longest and best stories deal with the complex elder duck. His drawing style stems from his education in architecture and technical drawing, with no formal education in art.

For those who consider Disney comics childish stories for five-year-olds, Rosa's style of making comics may be a surprise. The artist is known for doing ridiculously extensive research, basing much of his adventure stories on real historical factlets and making sure all the possible science in his comics is valid. In Life and Times, he drops famous people from the late 19th and early 20th century to Scrooge's life here and there, but always makes sure they were around that area around that time.

Another notable feature of Rosa's work is his unveiling of the Duck Family Tree, based on random Remember the New Guy? characters from Barks' stories.

As of 2009, due to fading eyesight, and after years of disagreements over low pay and never getting any royalties from publishers, Rosa is more or less retired from comics. Here's

his own words on the end of his career.

Rosa also wrote two TaleSpin episodes, "I Only Have Ice for You" and "It Came from Beneath the Sea Duck".