This Way to Certain Death 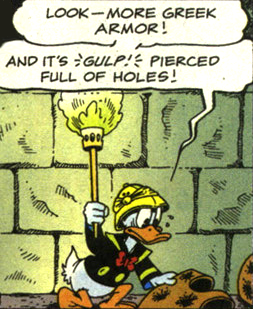 Our adventurer is working his way through the dark tomb of King Nohatsuput, but he is not worried about the Curse, nor the many Death Traps, nor Nohatsuput's Mummy rising again to strangle him. Nope, no worries at all because he bought a special talisman from the local villagers. But wait...the bones of many previous adventurers all lie along this path...all with the same familiar talisman...

This trope describes the instance when a character (or perhaps just the audience) realises this is a dangerous area, because many other people in the same circumstances have left evidence of their demise. To continue might be considered Schmuck Bait but we've got a story to tell.

In several instances, this trope becomes a Deus ex Machina that helps the main character or hero get out of the incoming peril in some way. This can be simply the warning that the area is dangerous, but sometimes the hero may find useful items left by the victims. Compare Follow the Chaos.