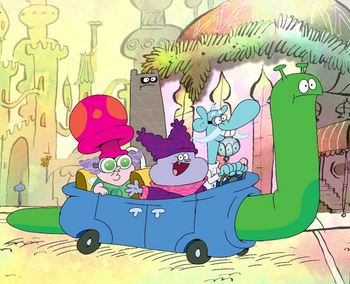 From C.H. Greenblatt, formerly a writer and storyboard artist on both SpongeBob SquarePants and The Grim Adventures of Billy & Mandy, comes this kooky little series inspired by food and Dr. Seuss.

Set in Marzipan City, an odd place full of weird and wonderful creatures, and even weirder and more wonderful foods, the show tells the story of Chowder, a little fat lavender bear-cat-rabbit boy who is the apprentice of Mung Daal, chef and owner of his namesake catering company. Along with Mung's wife, Truffles, and gigantic rock monster, Shnitzel, they spend many crazy and wacky adventures together in the realm of cooking, while Chowder dreams of one day becoming a chef himself, though his eating habits might prove a problem...

The series was cancelled in August 2009 as the network felt that the show didn't fit their new target demographic of older boys; a demographic the network hoped to interest with the then-new live-action CN Real block. The series finale aired a year later on August 7, 2010.

The series returned through Cartoon Planet in 2012 as a part of Cartoon Network's 20th anniversary. As of March 2013, you can also find it on Netflix (originally, the first two seasons were available, but, as of 2015, it's the complete series). As of June 2, 2014, you can catch reruns on Boomerang.

Now with a recap and Shout Out page!

You don't know what you're missin'... if you aren't in the kitchen!

Example of:
Out of Focus