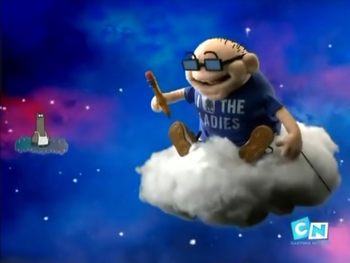 It should say a lot about this show when its own creator is a recurring character!

Chowder. Sweet Jesus, Chowder. The fourth wall was utterly DESTROYED in this show, in almost every single episode. At one point, someone complied all of them and found that there were around seventeen minutes worth of these types of jokes spread out throughout the show's entire run. Such instances include...