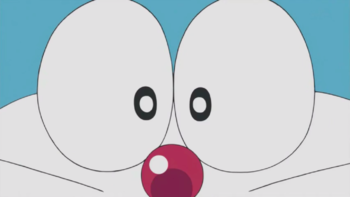 Ahem... This is a common technique in movies and television shows, Extreme Close-Ups ("ECU" or "XCU") are used when cameras zoom up to the face of the character in focus, sometimes zooming right in their eyes (with some letterboxing for good measure) or any other part of their face. Often time it's used to emphasize drama, and other times it's used for comedy. Maybe even add a hint of mystery.

Often used in moments of Thousand-Yard Stare, or the Mexican Standoff. Compared to Gross-Up Close-Up, Eyedscreen and Eye Recall.

It only goes to show, that hatred and bigotry truly is skin deep.

It only goes to show, that hatred and bigotry truly is skin deep.