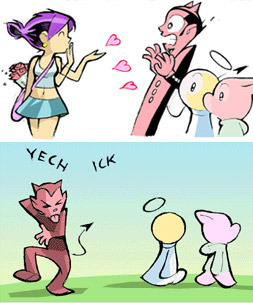 Garth: Wayne, what do you do when, every time you see a really hot girl, you feel like you're going to hurl?
Wayne: I say hurl. If you blow chunks and she comes back, she's yours. If you spew and she bolts, it was never meant to be.
— Pearls of wisdom from Wayne's World
Advertisement:

Exaggeration of the nervousness and discomfort one feels at approaching someone cute to the point that they become physically sick (major turnoff). If the character is lucky, they might find the one person who doesn't trigger the reaction. Compare Cannot Talk to Women, Love Makes You Crazy, Does Not Like Men (or women), Paralyzing Fear of Sexuality and Chaste Hero. See also Girls Have Cooties for the childish version and Affection-Hating Kid (although for Affection-Hating Kids, their reasons for feeling nauseous is often because they don't find anyone cute and are grossed out by the idea).

Oddly, this is not automatically a Comedy Trope. Or an anime trope, but it's used far more there.

open/close all folders
Anime and Manga
Comic Books
Fanfiction
Advertisement:
Film
Literature
Live-Action TV
Music
Theatre
Representative lyrics from "Love I Hear," from "A Funny Thing Happened on the Way to the Forum":