Film / The Good, the Bad and the Ugly 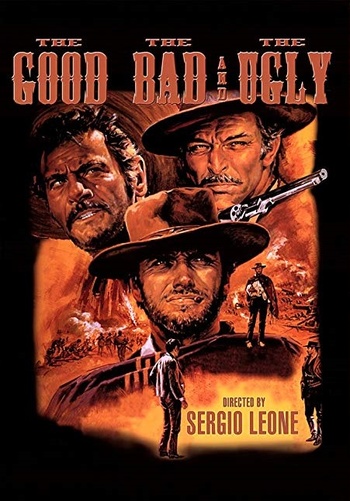 "Two hundred thousand dollars is a lot of money. We're gonna have to earn it."
— Blondie
Advertisement:

The Good, the Bad and the Ugly (Italian: Il buono, il brutto, il cattivo, literally "The Good One, the Ugly One, the Bad One"), directed by Sergio Leone and released in 1966, is one of the Dollars Trilogy of Spaghetti Westerns that served as a Deconstructor Fleet to the entire Western genre. It is the last, and probably the most famous of the trilogy, and is credited with helping to kill the Western genre (due to how thoroughly it disassembles said genre) and inventing a bevy of new tropes (even popularizing the Mexican Standoff). It's had an incredible impact on the entirety of film-making since then, and is generally regarded as one of the greatest films ever created. The soundtrack was composed by Ennio Morricone, and remains perhaps his most memorable work (or at least on par with Once Upon a Time in the West).

During The American Civil War, the bounty hunter "Blondie" (Clint Eastwood) and the bandit Tuco (Eli Wallach) are running a con game until the former decides to terminate their partnership and take the money. Tuco sets out for revenge. A mercenary, Angel Eyes (Lee Van Cleef), finds out about a stolen cache of Confederate gold, and learns the name of the man who knows where it's hidden. Tuco and Blondie stumble upon this knowledge and the three gunslingers engage in a battle of betrayal across the war-torn landscape.

Somewhat fittingly — given that the "Dollars" trilogy started with an unauthorized knockoff of Yojimbo — The Good, the Bad, and the Ugly now has a Foreign Remake in The Good, the Bad, the Weird (which is Korean and moves the setting to Japanese-controlled Manchuria in 1941).

This film provides examples of :

HEY BLONDIE! YOU KNOW WHAT YOU ARE?! JUST A DIRTY SON OF A aa-AA-aa-AA-ahhhh
Feedback