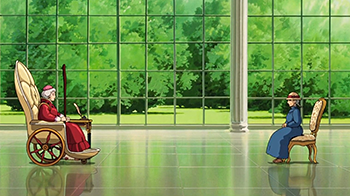 Later on directors such as David Lean and Akira Kurosawa used the format for more artistic shots, to the point where their widescreen films actually lose a lot in being cropped to 4:3 ratio.

Although landscapes are still some of the most common forms of widescreen showing shots, others include people far apart from each other or showing a huge crowd of people.

One definite gimmick form of this is showing a shot in normal screen ratio, and then having it spread out to widescreen.

Film studios also marketed their respective widescreen formats in the early days (since they each used tech that could be patented), even if most were essentially the same result (a wider camera and screen), except for Polyvision and Cinerama (both of which utilized three synchronized projectors, the latter also using a deeply curved screen).

Compare Letterbox, Open Matte, Visual Compression (all three are ways to try to fit widescreen into normal ratio), 3-D Movie, Shoot the Money. The audio equivalent of this is Gratuitous Panning.