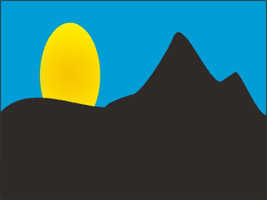 Visual Compression in action. Note the ovoid shape of the sun.
This refers to a method of squeezing a widescreen movie onto a television screen. (This also occurs in newspaper comics when they want to cram more strips per page.) How is this accomplished? Exactly what we said — the original frame is "squeezed", or visually compressed, horizontally until it fits, likely using an anamorphic lens (which works not unlike a Fish-Eye Lens).
Advertisement:

On the other hand, Visual Compression does noticeably distort the image, which can have a rather discombobulating effect on the viewer. For this reason, Visual Compression is almost never used for the entirety of a film, being restricted instead to brief uses such as credit sequences or just to create a weird look and feel (such as a Dream Sequence or Impairment Shot). It does, though, turn up in shorter venues, for example in music videos (Soundgarden's "Black Hole Sun" and Paula Abdul's "Promise Of A New Day" spring to mind). Some widescreen TV sets also have the option of stretching non-widescreen material to fit the screen, in case their owners are lucky enough to not be able to notice the distortion. Some channels will pre-stretch older materials as well. For example, some networks that air syndicated reruns of Friends, will stretch the image to widescreen before broadcast. If you have an older, non-widescreen TV, you'll notice they've hacked off the "F" and "S" in the show's logo during the introduction.

Technically speaking, the anamorphic process is not used specifically to fit a widescreen image into a TV screen, but rather to fit a widescreen image into 35mm Movietone (1.19:1) film; then, when projecting, the same type of lens is used again to unshrink the image, returning it to its original aspect ratio. (This process uses up the maximum amount of film area in transit.) Visual Compression occurs when a film is recorded using an anamorphic lens, but then projected using a normal lens, which does not undo the "squishing" of the image. IMAX Grand Theatre (GT) laser projectors invert this process, stretching a 4096x2160 1.90:1 image 33% taller to 1.43:1 when showing 1.43:1 content on the giant screen.

Similarly, DVD uses a similar technique to encode content. Both 4:3 and 16:9 works have a resolution of 720x480, which is 3:2 in square pixels, seemingly chosen as a compromise between the two ratios. 4:3 content is squished to the correct shape, and 16:9 content is stretched. This allows widescreen content to be encoded with more resolution and smaller letterboxes.

Not to be confused with Video Compression, which reduces a video's file size for electronic storage.

From the episode "Have we gone MAD??" about the Blackmagic Ursa Mini Pro 12K. The quirks of using its footage in Adobe Premiere is so confounding, it distorts reality.

From the episode "Have we gone MAD??" about the Blackmagic Ursa Mini Pro 12K. The quirks of using its footage in Adobe Premiere is so confounding, it distorts reality.