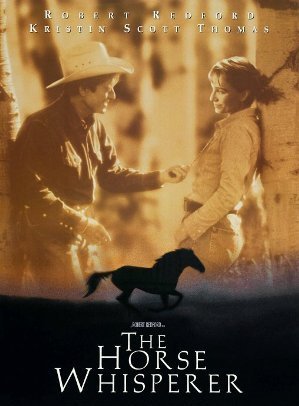 The Horse Whisperer is the name of a 1995 novel by Nicholas Evans and of a 1998 film adaptation of it. The latter was directed by Robert Redford. The main stars were Redford himself (directing himself for the first time onscreen), Kristin Scott Thomas, Kate Bosworth and Scarlett Johansson.

The film begins on a winter morning, with teenagers Grace MacLean (Johansson) and Judith (Bosworth) taking their horses for a ride. An accident involving an icy slope and a truck results in Judith and her horse being instantly killed. Grace and her horse, Pilgrim, survive but are badly injured. Grace loses part of her leg in the subsequent surgery.

Some time later, the duo have recovered as well as expected. Their bodies are healthy, but the resulting trauma is everpresent. Grace is bitter and withdrawn, Pilgrim wild and uncontrollable. Annie MacLean (Scott Thomas) senses that the two will have to recover together. She calls for Tom Booker (Redford), the titular horse whisperer.

The story explores both the recovery and the mutual attraction developed between the two adults. Which is confusing for them as Annie is still married and Tom is recovering from a divorce.