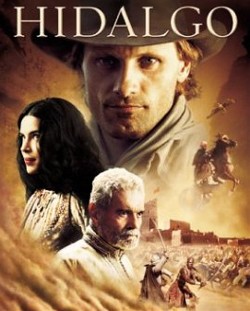 "Our culture revolves around our sacred horses."
Advertisement:

Hidalgo tells the story of Frank Hopkins (Viggo Mortensen), an American cowboy who was reduced to touring in Buffalo Bill Cody's Wild Wild West travelling show. He is the owner of a paint Mustang, Hidalgo, with whom he has an extraordinary bond.

Hopkins is then invited to compete in a famous Arabian race, the Ocean of Fire, three thousand miles across some of the hottest, most forbidding desert in the world. While there he meets Sheikh Riyadh (Omar Sharif), owner of Al-Hattal, the most perfect Arabian horse in the world at that time, who loves tales of the American West; the sheikh's daughter, Jazira (Zuleikha Robinson), who rides like the wind and is not at all the meek Bedouin woman she pretends to be, and who is promised to the Prince riding Al-Hattal; Lady Anne Davenport (Louise Lombard), owner of a gray Arabian mare whom she wishes to breed with Al-Hattal; and Prince Bin Al Reeh (Saïd Taghmaoui), who wants Al-Hattal - and Jazira - for his own.

Hidalgo has chases, shootouts, rescues, and triumphs over unbelievable odds. It is anything but a true story, but, to quote Roger Ebert, "... if you do not have some secret place in your soul that still responds even a little to brave cowboys, beautiful princesses and noble horses, then you are way too grown up and need to cut back on cable news. And please ignore any tiresome scolds who complain that the movie is not really based on fact. Duh."