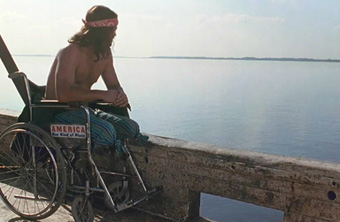 The ocean... as deep as his sorrows.
"Where's the rest of me?"
— Drake McHugh, Kings Row
Advertisement:

May be the predecessor to Artificial Limbs, Arm Cannon, Hook Hand, or Swiss Army Appendage. Frequently appears in the backstory of a Handicapped Badass. If played for laughs, it's Amusing Injuries; if there's no lasting damage it's Only a Flesh Wound. If it's a severed hand, expect it to be used in a Dead-Hand Shot. A character with Appendage Assimilation will simply stitch a new appendage on the gaping hole, and a character with a sufficiently powerful Healing Factor will grow the appendage back before long. Expect these characters to be extra-likely to lose their limbs in the first place so their abilities can be shown off.

Interestingly enough, you almost never see a limb actually sewn back to the body of the victim, which is probably the most sensible thing you can do once deprived of it (provided that you're able to retrieve the lost limb in a reasonable amount of time and keep it in sanitary conditions). Although this is actually a well-known, albeit rare, occurrence in surgery with a decent ratio of success in terms of restoring partial or even full limb mobility (at least considering the complexity of the procedure; there is a lot of stuff that needs to be joined back together in your hand, mind you, not to mention the constant time pressure), most people are unaware of it and would probably ridicule the very idea.

Compare Knee-capping, and Agony of the Feet. Fake Arm Disarm is a bloodless version of this trope, whereas a Literal Disarming is this trope done for the explicit purpose of removing someone's ability to fight or wield weapons. If the injury specifically represents or comments upon some aspect of the character it counts as Symbolic Mutilation.