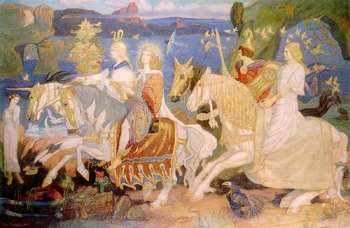 "Riders of the Sidhe" by John Duncan
Advertisement:

You have probably heard some stories influenced by these myths, although you might not realize it. These are the tales that The Fair Folk comes from.

There are two main (surviving) strands of Celtic mythology: Goidelic (Irish/Scots/Manx) and Brythonic (Welsh/Cornish/Breton). While they share many tropes and have certain figures in common, they do not really overlap; each has its own unique stories. They are further split into "Cycles" (Ireland) and "Branches" (Wales). Mainland Europe's Celtic traditions were mostly lost due to invasion and assimilation of Celtic populations in their conquerors' own societies (mainly The Roman Empire and Germanic tribes). The cultural taboo against consigning knowledge to writing certainly didn't help.

In a nutshell: before people came to that archipelago off the Northwestern coast of continental Europe

, a race of intelligent magical beings calling themselves (in Irish, anyway) the Tuatha Dé Danann ("the people of the goddess Danu") lived there. With the arrival of people and their permanent settlements, the Tuatha Dé Danann continued to muck about in the lives of people but retreated to the Otherworld, their home world, a world still reachable through places such as fairy forts or fairy burrows. (Interestingly, the "gateways" identified in Celtic stories would not infrequently turn out to be archaeologically significant sites dating to the Neolithic period.)

Celtic mythology also includes Scottish, Manx, Breton and Cornish stories, but these are lesser-known; the core of the Celtic literary tradition has been in Wales and Ireland since the 5th century, and in any case Wales and Ireland have always been the larger and most culturally dominant members of their respective cultural groupings (although Brittany has at times given Wales a run for its money). Going even before then, the Celtic peoples lived across Continental Europe, with the core of Celtic culture being in Gaul (modern France) but extending across the Rhine into what is now Germany and south into Iberia. There was even a Gaulish culture in central Anatolia (a.k.a. Asia Minor, in modern Turkey) known as Galatia (now best known for assimilating to the surrounding Greek culture and being the addressees of one of the Pauline Epistles). However, the Continental Celtic cultures left very little writing, having learned to write relatively shortly before being conquered by the Romans and then completely Romanised (or in the case of the Galatians, Hellenised) in a way that never quite happened in Britain. Indeed, Julius Caesar (in his Commentaries on the Gallic War) cited the spread of "civilized" Roman writing and Roman ways among the Celts of Gaul as a reason for fighting and subjugating them, on the theory that if the Gauls were allowed to develop a proper urban civilization, their stronger fighting spirit combined with the numbers and organization urban civilization brings would be an unacceptable risk to Roman security. We have just enough writing from the continental Celts to (1) identify their language as Celtic and (2) see tantalizing hints at a mythology broadly similar to what we know from Welsh and Irish sources without leaving anything conclusive.

See Irish Names for pronunciation help with the Irish. (You're on your own with the Welsh.)

Works on the wiki that constitute Celtic mythology:
Irish

Works based on (or including elements of) Celtic Mythology:
Films - Animated

Works substantially derived from (or outright retellings of) Celtic mythology: