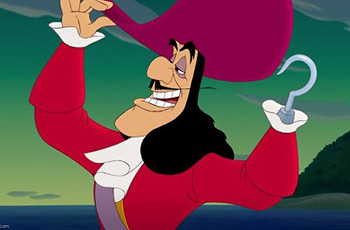 Just be careful in the bathroom.
"This maniac is running wild and he has a scary look
And his right hand, where it ought to be, he has a razor-sharp hook!"
— Freaky Stories, Watch Out for The Hook
Advertisement:

A character replaces their hand with a hook or similar object. Bonus points if a crocodile is somehow involved.

This is an example of Fashionable Asymmetry, subtrope of Artificial Limbs, and is one of the stereotypical attributes of pirates. In most fiction, someone who uses one of these is probably evil, although exceptions are possible. More generally, it serves as a Red Right Hand, though such uses may have reached a Dead Horse Trope level. Such an individual will invariably be Dressed to Plunder.

See also Hooks and Crooks. Seadog Peg Leg is a sister trope. Can overlap with Ironically Disabled Artist if a one-handed musician uses a hook to play an instrument.

Fishook attacks Luigi with his hook hand, getting it stuck in the hull of his boat and leaving him vulnerable.

Fishook attacks Luigi with his hook hand, getting it stuck in the hull of his boat and leaving him vulnerable.