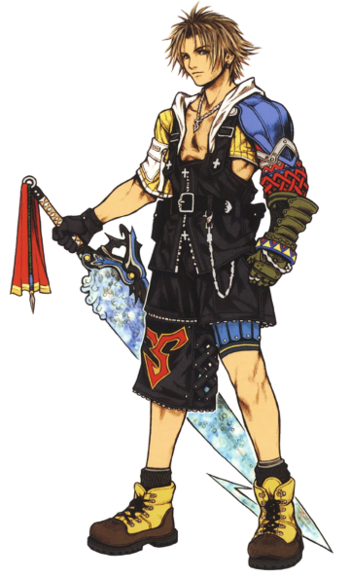 Well, at least his shoes matchnote And even then barely!.
Advertisement:

Symmetry is supposed to be a natural attractive feature, and any deviation is seen as ugly. Apparently, no-one told these guys, or their fans. They take Impossibly Cool Clothes to a whole new level. Why constrain yourself to pant legs of one length, or stockings that match, when you can wear one short and one long? It must be kept in mind, of course, that fashion is a fickle thing, and largely a matter of perspective. For every outfit listed here, some will fight to the death to say it looks cool, while others think it looks, in the words of Simon Cowell, atrocious.

Some medieval armour was actually asymmetric, often to lend extra protection to the body's dominant side, or to leave off armour for the side of the body that was already protected by a large shield. Ironically this had the effect of balancing the armour by making the heavy side weigh the same as the lighter side plus the shield.

One would expect cybernetic eyes to come in pairs, but as often as not a character will only have one cyber-eye (usually glowing), while the other one is still organic. This makes sense if the cyborg equipment replaces body parts lost to injury or disease — if you only lost one eye (or arm or whatever), why replace both of them?

Take this trope too far, and you can run into Rummage Sale Reject. And applying this to 2D games results in Ambidextrous Sprite 99% of the time. Applied to text or things outside of clothing, this trope becomes Unconventional Formatting.

For extra bonus points, why not have mismatched body parts? Nothing says Evil like a hook hand, a horn on one side of your head, or an angel with one wing! And it doesn't have to be that complicated: both good and evil can enjoy the duality that heterochromia implies. Often the result of a Duality Motif.