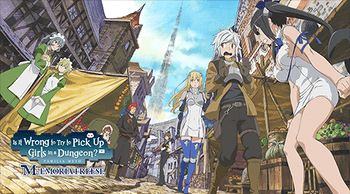 A Mobile Phone Game based on Is It Wrong to Try to Pick Up Girls in a Dungeon? and the first Crunchyroll-backed game. This gacha game follows the story of the anime adaptation and uses it for the cutscenes and models. It also features the other stories and several new scenarios, one of them being "Grand Day" which explores the lore of the Three Great Quests. The game was localized on March 30th, 2018.

I'll ask again. Is It Wrong to Try and List Examples of a Work's Tropes?