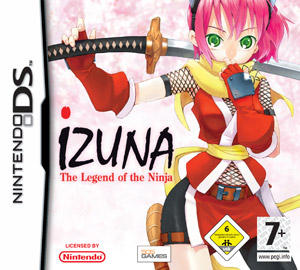 Finally, a dungeon RPG strong enough for a man...but played as a hot CHICK!
—magazine ad for the game
Advertisement:

Izuna: Legend of the Unemployed Ninja is a roguelike RPG for the Nintendo DS developed by Success and published in the US by Atlus. A young Ninja named Izuna is looking for a place to find home after her clan's old master fired them, believing ninja no longer have a place in the modern world. They eventually settle on an out-of-the-way village, when Izuna's "Grandboss", Gen-An, wanders away from the village and into the realm of the gods. In the process of rescuing him, she manages to make several gods very angry, and has to retrieve several magical orbs to help the now-cursed natives from various afflictions and bring them back to normal.

A sequel, entitled Izuna 2: The Unemployed Ninja Returns, was released in 2007 in Japan and 2008 in the US. Shino, Izuna's friend, disappears in the midst of a wedding, so Izuna goes on a quest to find her. Izuna finds her, only to discover that Shino was looking for her sister, Shizune, so Izuna and her group decide to help search for Shizune. But by looking for Shizune, Izuna angers a group of foreign gods, who attempt to prevent her from reuniting with Shizune.

The Izuna games contain examples of: