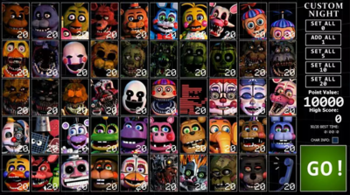 So, your thirst for challenge isn't satisfied yet, eh? Even though the story is over, you still want more excitement from these animatronic characters. Well, you may find yourself regretting those words soon enough, because we've prepared a new challenge that's really going to push you to your limit!

...What? Why aren't we addressing you as a security guard or employee? Well, there's hardly any need to bother with that; after all, this game isn't canon anyway! Maybe. You're not going to be stepping into the shoes of some other character this time; this time, it's just you yourself up against a couple of animatronics!

Well... okay, it's more like a couple dozen animatronics. 50, to be precise. Maybe more, if you're unlucky. But don't worry, since we've created a new interface to help you select the challenge level that's just right for you! And hey, maybe there's even some prizes along the way! So best of luck to you on this latest challenge!

You are most certainly going to need it.

Relased on June 27, 2018, Ultimate Custom Night is the second spin-off game, and the eighth game overall, in the Five Nights at Freddy's series. Originally intended as free DLC for Freddy Fazbear's Pizzeria Simulator, the mode eventually grew so big that Scott Cawthon decided to release it as a standalone game. True to its name, the game is an expansion of the traditional Custom Mode, allowing the player to set the difficulty of each animatronic individually, ranging from 0 to 20. The twist: this time, the series brings back various animatronics from previous games, more than 50 in total! Many of these characters have returning mechanics, while others have whole new mechanics designed specifically for this mode. The goal of the game is to try to survive the night with more and more characters on harder and harder difficulties, with each level added increasing your score at the end of the night. Along the way, you'll unlock new skins for the office, as well as some cutscenes.

And for those of you who are truly brave, there is always that final challenge, the one Scott himself vows is truly impossible: 50/20 mode (it's winnable). But woe betide any poor soul who sets foot in that challenge...

That game was totally rigged!

Mr. Hippo likes to talk at length after you get jumpscared by him. Sometimes for up to 3 minutes. And you CAN'T skip these monologues.

Mr. Hippo likes to talk at length after you get jumpscared by him. Sometimes for up to 3 minutes. And you CAN'T skip these monologues.