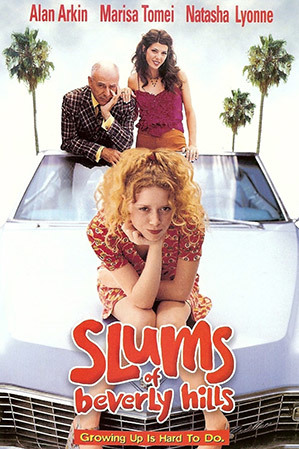 Slums of Beverly Hills is a 1998 American comedy film that follows fourteen-year-old Vivian, her brothers, and perpetually broke father as they apartment hop through the affluent neighborhood in order for the kids to keep attending the prestigious high schools.

Vivian's uncle Mickey is often helping out by sending them some money for rent. But Uncle Mickey has got his own problems in the form of his adult daughter Rita, who runs away from drug rehab and seeks shelter over at her cousin Vivian's. Murray, Vivian's dad, offers to help Rita get the help she needs and help her get her degree in nursing if Mickey will pay the rent of a more plush apartment. Mickey agrees to do this, on the condition that Rita doesn't fall back into drugs and doesn't fail her classes, and expects progress reports.

What then follows is Vivian basically babysitting the twenty-nine-year-old cousin and making sure she stays clean. But Vivian is much more interested in hanging out with the neighbor boy, Eliot and desperately wants her family to not be so embarrassing.