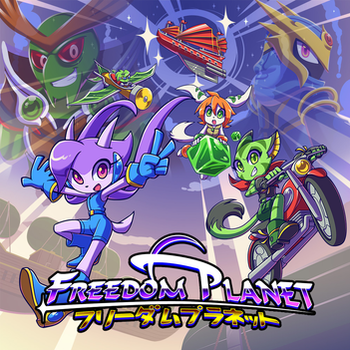 A crisis has befallen our world. For centuries, we have depended on the Kingdom Stone... but its strength is fading. It cannot keep up with our growing demand for energy. The Prince of Shuigang, poisoned with madness over the death of his father, has spread machines across the land to steal energy from other kingdoms. Tensions are growing, and I fear that war may be inevitable.
— The Royal Magister, narrating the game intro
Advertisement:

Freedom Planet is a Platform Game produced by indie developer Galaxytrail/Strife, based on characters by artist ZiyoLing,

developed on the Multimedia Fusion 2 platform. The gameplay is similar to Sonic the Hedgehog in that it focuses on high-speed platforming, but it puts an equally strong focus on combat and mixes in a bunch of other vaguely recognizable gameplay elements such as Mega Man Zero-styled combat and Gunstar Heroes-styled bosses. The game is designed to feel like 2D Japanese import titles from the PlayStation/Saturn era, combining detailed sprites and environments with high-quality music tracks, full voice acting, and animated cutscenes. It was released on Steam on July 21, 2014, after a successful Steam Greenlight campaign,

later seeing release on GOG.com on December 2nd and the Humble Store. A Macintosh and Linux version of the game was later released on April 17, 2015, a Wii U version released in North America on October 1st, 2015, and a PlayStation 4 version was released on March 21, 2017. A Nintendo Switch version was announced at E3 2018 and released on August 30, 2018.

The infamous alien warlord Lord Brevon's campaign of galactic conquest comes to an abrupt end when, one day, his dreadnought is ambushed over the primitive planet of Avalice by Commander Torque of the local Space Police, stranding both of them on the planet. Brevon hatched an elaborate scheme to drive the planet's three great kingdoms into war with each other over the Kingdom Stone, so that he would be able to claim the stone to rebuild and power up his spaceship and army of Mecha-Mooks. As Torque lost most of his equipment and his crew, he has to ask for help from the locals. Enter the true heroes of the story - an Action Girl trio of: Draconic Humanoid Sash Lilac, her best friend, Wildcat Carol Tea, and hound dog Milla Basset offer to help Torque in his quest with their unique abilities.

A sequel, titled Freedom Planet 2 was announced December 2015. Taking place two years after the first game and starring the same three protagonists, the game's storyline deals with Merga, an ancient Water Dragon freed from her prison due to the events of the last game. The game sports a visual update and features customizable difficulty and the ability to revive on the spot.

A demo that contains the first stage along with several unlockable features is available for PC. You can find it on their website here.