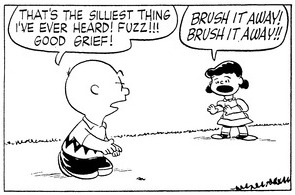 We would be sorry, but this is Lucy we’re talking about here...
Varla: You afraid of milk? How old are you, man? I got a two-year-old nephew who's not afraid of milk!
Monk: You must be very proud of him.
Varla: For what? Not bein' afraid of milk? That just means he's normal!
— Monk, "Mr. Monk and the Girl Who Cried Wolf"
Advertisement:

Everyone is afraid of something. While phobias are defined as irrational fears, most of the time they still make perfect sense. Fears of things that can hurt you like spiders, heights, needles, and snakes are perfectly understandable.

A crippling fear of grass, on the other hand, not so much.

Sometimes, in a work, a character has a phobia of something that is so ridiculous that people have a hard time comprehending it. Often comes in one of these flavors:

A Comedy Trope, this kind of phobia is usually Played for Laughs. In the rare instance that this phobia is Played for Drama or characters sympathize with the phobiac because of it, such as if the said phobia is a result of childhood trauma, then it is considered a subversion. Justified if a logical reason is given for said fear.

Remember, however, that Reality Is Unrealistic. While an absurd phobia is played for humor in fiction, people in real life can have phobias and trauma triggers that seem ridiculous to others but have very logical origins — for instance, a person who has repressed memories of being abused by a man in a red cap could develop a phobia of red hats without knowing where it comes from. Ignoring or deliberately poking at the phobia because "it's silly" is cruelty, and helping someone get over a phobia requires psychiatric training and should not be attempted by nonprofessionals.

Compare Faux Horrific, Nightmare Retardant, and Weaksauce Weakness. An Ironic Fear can be considered one of these. If one of these phobias is a recurring plot point, then it is Why Did It Have to Be Snakes?. In contemporary settings, when irrational fear causes magical creatures to hide from Muggles, it is a Masquerade Paradox. To the phobia sufferer, of course, it is always Serious Business. This can add some levity to a "What Do They Fear?" Episode. See also Elephants Are Scared of Mice, where a huge and powerful animal is irrationally afraid of a small and harmless one.

Which is exactly a thing someone with a genuine phobia would say, though.

Wow, who would've thought that the most powerful pony in Equestria has a really insane fear?

Wow, who would've thought that the most powerful pony in Equestria has a really insane fear?