That Came Out Wrong 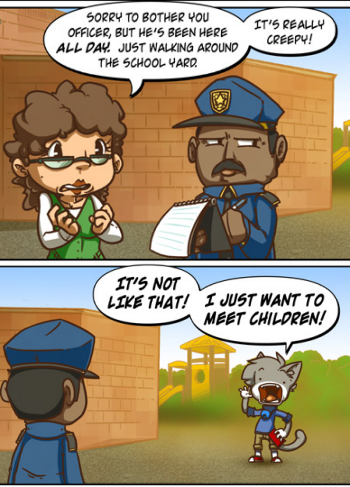 He should have clarified that he wants to "meet" them on StreetPass.
"Funny how you can say something in your head and it sounds fine..."
— The Eleventh Doctor, Doctor Who, "The Vampires of Venice"
Advertisement:

A character says something innocuous, but it can easily be misconstrued as something really dirty. Different from Innocent Innuendo in that the audience isn't misled—it's just the character isn't filtering their thoughts properly. Other, more dirty-minded characters may make fun of the speaker or chime in with "That's What She Said!" More commonly, the speaker catches herself and, after a Beat, acknowledges it with the title phrase or something to the same effect like, "You know, now that I'm saying this out loud, I realize how ridiculous/idiotic/wrong it actually sounds".

Several tropes can be used as a result of the things that come out wrong. For example, if a character says something that unintentionally includes Ho Yay in it, then that character often gets Mistaken for Gay as a result.

A related phenomenon is this sequence:

Verbal Backspace may be employed to select a more appropriate phrase. May degenerate into Digging Yourself Deeper or Freudian Slippery Slope. See also Freudian Slip, Open Mouth, Insert Foot, Lampshaded Double Entendre (which this is a subtrope of, specifically one where the same speaker is also doing the lampshading) and Ambiguous Syntax.

Compare Accidental Innuendo, where this isn't intentional on the writer's part. Related to It Seemed Like a Good Idea at the Time in a non-innuendo way, where an idea sounded good in your head but turns out to be terrible out loud.

Not to be confused with Came Back Wrong. Basically the verbal version of Not What It Looks Like.