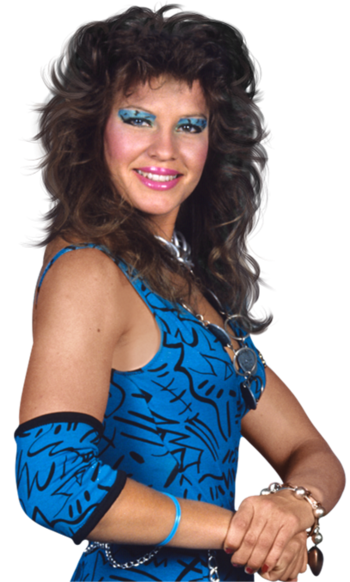 Wendi Richter (born September 6, 1961) is a retired American professional wrestler. Trained by Leilani Kai, Judy Martin and Joyce Grable, she began her professional wrestling career teaming with The Fabulous Moolah and Joyce Grable, the latter of whom she held the NWA Women's World Tag Team Titles with twice. In the 1980s, she joined the World Wrestling Federation (WWF), just as WWF owner Vince McMahon brought in Cyndi Lauper for a feud with Captain Lou Albano, which eventually resulted in Albano seconding WWF Women's Champion The Fabulous Moolah, while Lauper was in the corner of Richter. Richter defeated Moolah at MTV's The Brawl to End It All for the Women's Championship on July 23, 1984, ending what was billed as the longest championship reign in professional wrestling history, Moolah's 28-year reign as recognized by the WWF.note In reality Moolah had lost the title several times between 1956 and 1978, and Richter's win had in reality only ended a nearly seven-year reign by Moolah as champion. This match was also the beginning of the "Rock 'n' Wrestling Connection", an era that combined both music and professional wrestling. Richter faced Moolah's protégé, Leilani Kai, who defeated Richter for the title, in early 1985 at The War to Settle the Score. Richter regained the title at the first WrestleMania one month later. Richter was also animated for a CBS Saturday morning cartoon, Hulk Hogan's Rock 'n' Wrestling.

After regaining the title from Kai, Richter was scheduled to defend it at Madison Square Garden on November 25, 1985 of that same year against a mysterious masked opponent known only as The Spider Lady. During the match, The Spider Lady broke from the pre-scripted events, and the referee delivered a swift three count, despite Richter kicking out after a count of one. Richter ignored the bell and continued to attack the Spider, unmasking the new champion to reveal that it was The Fabulous Moolah in disguise: Richter fell victim to a real-life "screwjob" finish who would be known as "The Original Screwjob"

(to differentiate it from that other screwjob).

Upon leaving the WWF, Richter wrestled in Puerto Rico, Japan, and throughout the United States in independent promotions. She resurfaced in the American Wrestling Association (AWA) in 1987 to challenge champion Madusa Miceli for the AWA Women's Championship, winning the title in December 1988, but the title would be vacated in December 1989 when Richter left the promotion. She would eventually mend her differences with the now renamed WWE and was inducted into the WWE Hall of Fame in 2010.