Fanfic / Bruce Has a Problem 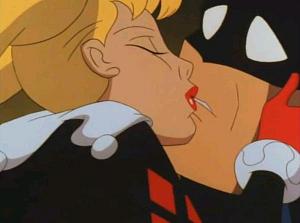 And this is it.
Advertisement:

Beginning as a one-shot crackfic by Adrian Tullberg, Bruce Has a Problem

tells the tale of what happens when Harley Quinn deduces Batman's identity and decides to leave the Joker for him. Bruce is in shock, Alfred is amused, the Bat-Clan is confused, and Harley's oblivious.

And the less said about what The Joker feels about this, the better.

Due to public affirmation of the idea's brilliance, this one-shot subsequently transformed into a Round Robin (as opposed to Harley, who makes for a really Stacked Robin), moderated by Andrew J. Talon, showing the deepening of Bruce and Harley's surprisingly effective relationship and the often unpredictable effect it has on everyone else.

Note: The above link is to a thread on spacebattles.com, which is littered with non-story discussion. You can find a table of contents that links to most of the story-posts here

The story is found on various threads. Links to the threads: Thread 1