I'll Be in My Bunk 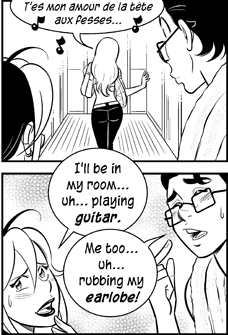 Some variations on the theme.
A scene where it is made very clear that a character has found something so hot that they have to go somewhere where they can perform some immediate self-service.
Advertisement:

This can be a form of Getting Crap Past the Radar, assuming even the implication isn't too much for the censors.

Compare Get a Room!.