It Seemed Like a Good Idea at the Time 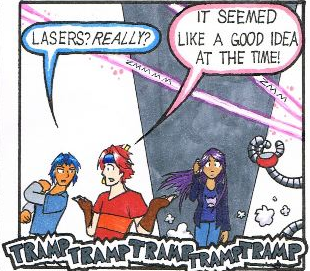 Using this image seemed a good idea...
"You joined [the army] because you broke up with your boyfriend... you'll wake up one day, totally over your boyfriend, thinking 'Oh My God, I joined the army.'"
— The Music Video Show, Episode 53

Someone does something that puts them, or the people around them in a bad or unpleasant situation. Hindsight reveals that although they had good intentions, their actions were not in their best interests.

If questioned about why they did it, they'll often respond with the reason for everything that has ever been done by anyone at any time and any place: "It seemed like a good idea at the time!".

This is also used sometimes as an explanation for Chaotic Neutral or Chaotic Stupid actions. Contrast I Did What I Had to Do, which does the same as in this case, but for Lawful Neutral or Lawful Stupid actions and their moral, rather than strategical, consequences. Often goes hand in hand with Alcohol-Induced Idiocy for obvious reasons. Sometimes goes hand in hand with Exhaustion-Induced Idiocy. If the plan somehow still works — and is stated or implied to work not despite but because of how ridiculous it seems — that's Refuge in Audacity and/or Crazy Enough to Work.

Compare the situational trope, Nice Job Breaking It, Hero, as well as Actually a Good Idea, Didn't Think This Through, I Was Young and Needed the Money, Not Quite the Right Thing.

Alternative Title(s): Seemed Like A Good Idea At The Time