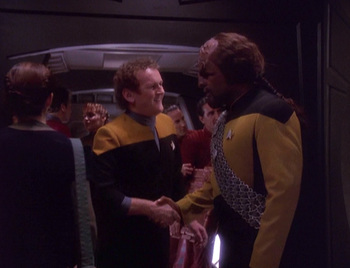 The One Where Worf Shows Up.
A task force of Klingon ships commanded by General Martok camps out around DS9 to await a potential Dominion incursion through the wormhole. Tensions rise as the Klingons throw their weight around: a gang of them beats up Garak, and Klingon ships begin boarding and searching other vessels for changelings without cause. Captain Sisko decides that the best way to handle Klingons is with another Klingon, so he sends for Lieutenant Commander Worf. Worf challenges Martok by slapping around his son and learns that Sisko's suspicions are correct: there's something else going on that Martok suggests could determine the future of the Klingon empire.
Advertisement:

Worf convinces a friend of his father to tell him the whole story: The Klingons believe Cardassia has undergone a Dominion-engineered coup, so they are preparing to invade Cardassia themselves. The Federation opposes the move, but Chancellor Gowron and the Klingon High Council go ahead despite the harm it could cause to the Federation-Klingon alliance.

Sisko "accidentally" lets Garak overhear a discussion about the attack, so he can pass the information along to the Cardassians. It seems the Klingon fears of Dominion influence are unwarranted. The Federation condemns the attack, so the Klingons end their peace treaty with the Federation. Gowron arrives at the station and invites Worf to join him, but Worf refuses to abandon his Starfleet post, so Gowron strips his family of their lands and honors.

Sisko contacts Dukat (now military advisor to the new civilian government of Cardassia) and offers to help him get the Cardassian council members to safety. After a large battle, they get the council on board the Defiant and head for home, pursued by a large Klingon fleet. This brings us to an impressive battle sequence as the station (armed with 5,000 photon torpedoes and multiple phaser banks) holds off the Klingons until reinforcements arrive.

The Klingons back off but make it clear that they do not forgive and forget. Worf goes through some soul-searching but decides to stay in Starfleet and becomes DS9's new Strategic Operations officer after Sisko provides Worf with some of his own insights.