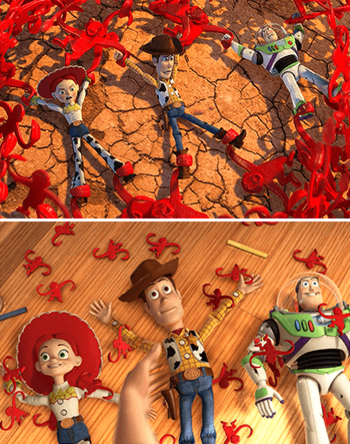 Somewhat similar to Fake-Out Opening but distinct, this is when the story starts with what appears to be a probably over-the-top Action Prologue, but after it's been going on for a while, maybe Played for Laughs, it's cut short. It's then revealed that this sequence was a Dream Intro, a Show Within a Show, a simulated test, or similar. Whatever the case, the beginning is revealed not to have been real, and the actual story now begins on a more restrained note. May be used among other things for when the main character is a loser who only dreams of becoming the kind of badass they're acting like in the imaginary prologue.
Advertisement:

Usually a film trope, though there's no logical reason why it can't be used in other media. In video games, it often serves as A Taste of Power. After some exposure, you can usually spot the humorous ones — unless the hero is played by Leslie Nielsen, in which case the movie may just be silly enough that it's all really happening.

When used capriciously, this trope can leave the viewer feeling cheated, but it can also be very relevant for the plot, or just cool or funny.

Compare Action Prologue, Fake-Out Opening, Danger Room Cold Open and Unwinnable Training Simulation (which may be this as well).

Beavis and Butt-Head Do America starts with a scene of the two as giants rampaging through a city.

Beavis and Butt-Head Do America starts with a scene of the two as giants rampaging through a city.