Film / The Way of the Gun 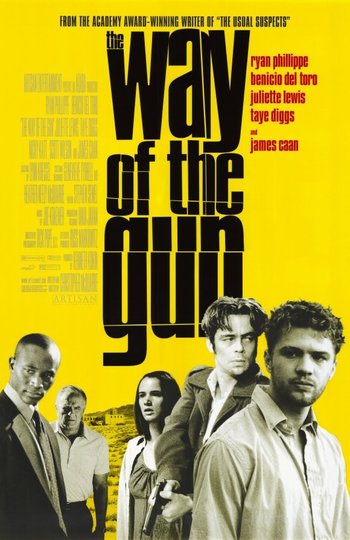 "We don't want your forgiveness; we won't make excuses. We're not gonna blame you, even if you are an accessory, but we will not accept your natural order. We didn't come for absolution, we didn't ask to be redeemed, but isn't that the way it is? Every goddamn time. Your prayers are always answered, in the order they're received."
Advertisement:

The Way of the Gun (2000) is the first film directed by screenwriter Christopher McQuarrie, best known at the time for his Oscar-winning script for The Usual Suspects.

After several unsuccessful attempts to get film projects off the ground, McQuarrie ultimately caved to studio pressure and wrote another underworld film, this time attempting to subvert the genre by pointedly exploring the characters' lack of morality. The film centers on two criminal low-lifes who, having chosen to live off the grid, stumble upon a way to strike it big: kidnap the young surrogate mother of a Mafia accountant's child.