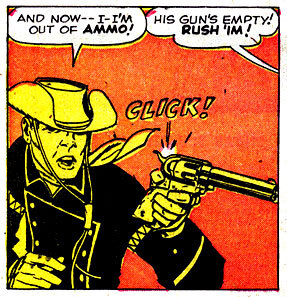 Someone's not counting.
Joel: [aims revolver and pulls trigger] *click* Shit!
Hunter: I know that sound... I've got you now, motherfucker!
— The Last of Us
Advertisement:

A character (usually the hero) is being chased by an armed gunman (usually the villain). After some time of chasing, shooting, and loads of property damage, the gunman corners them. There's nowhere left for the character to run, and they cower in fear as the gunman lines their sights with their target's head, and pulls the trigger.

Nothing. Not even a misfire. The shooter's gun runs out of ammunition right when they can get the killing shot.

This can represent the shooter's recklessness, especially if they've been shooting wildly & destroying all sorts of items & scenery in their efforts to kill the hero without paying any attention to the state of their firearm. However, this is not a case of Reckless Gun Usage used by people unfamiliar with firearms, but about characters that are. This is a nice aversion of Bottomless Magazines. This isn't to be confused with Where's the Kaboom?, as that is for explosive devices, while this is specifically for guns.

It's not enough for a character's gun to run out at any point for it to count. The gun has to run out when it having ammo would allow the shooter to kill the target with a well-placed shot. This is why it's dramatic for the gun to fail at the one point they need them most. It's very rare for the audience to know that the weapon has no ammo, but the characters don't, but it's not unheard of. When dealing with handguns, this trope works a lot better with revolvers than semiautomatics — semiautomatics have their slides lock back upon firing the final bullet, leaving no questions as to how many rounds are still in the gun.

The inverse is Counting Bullets, where the hero counts how many shots the villain has fired and specifically analyzes the situation to their advantage. This is different from that trope in regards to the fact that in the heat of the moment, most characters can't be bothered to try to analyze such a hectic situation like that. Even then, if the villain isn't counting, and runs out at the last moment, it's an example of this trope, not Counting Bullets. Because the villain is not counting.

This is more often than not done with villains, but examples of this happening to heroes exist.

A variation of this is It Works Better with Bullets, where another character deliberately invokes this by removing the bullets from the gun beforehand or takes another step to make the gun inoperable. A Subtrope of Reliably Unreliable Guns. See also Convenient Misfire.