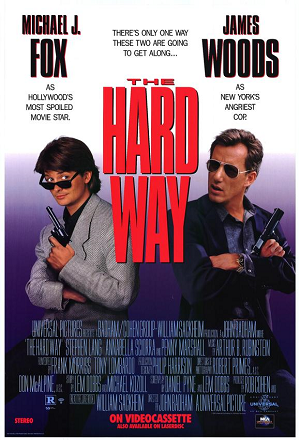 NYPD cop John Moss (Woods) is on the case of a serial killer known as "Party Crasher" (Stephen Lang). After a failed attempt to capture the Crasher in which he is injured, Moss is shown on the news having an obscene outburst. Meanwhile, actor Nick Lang (Fox), known as the star of a popular movie series featuring the hero "Smoking" Joe Gunn, wants to be taken more seriously as an actor, and decides to study under Moss after seeing his outburst on the news. This leads Lang to annoy Moss to no end, as well as making an impression on his girlfriend Susan (Annabella Sciorra) and her daughter Bonnie (Christina Ricci).

Not to be confused with the Tabletop Game of the same name. Or with Three the Hard Way.

The Hard Way provides examples of: