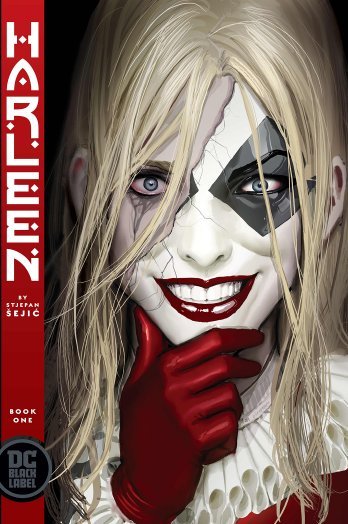 "There's a small, lucid part of me that wants to wake up. The dream has lasted quite a while. A long time in the dark. I mean, even the darkest night must end...Right?"
Harley Quinn

In 2017, artist-writer Stjepan Sejic posted a series of "little storytelling practices", fanart/story snippets detailing Harleen Quinzel's fall to the Joker and the creation of Harley Quinn, their abusive relationship and a possible salvation aided by Poison Ivy. While the snippets were well received, Šejić always insisted nothing more would come of them since the only place this story could be told well would be DC's Black Label which was a tier above him. In September 2019, DC's Black Label published the first issue of artist-writer Šejić's Harleen.

The reimagined origin story of Harley Quinn starts with Dr. Harleen Quinzel as an up-and-coming psychologist with clever ideas on how to lower the horrific crime rates of Gotham City. According to her hypothesis, many criminals diminish their capacity for empathy through constant stress until singular events have them Jump Off The Slippery Slope. Find the ones in danger of such events, prioritize them for psychological treatment and the recidivism rates should go down. To test her ideas, she just needs to interview the supervillains of Arkham Asylum. What could go wrong?