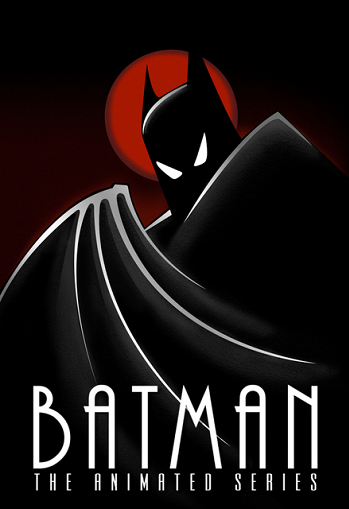 in "Nothing To Fear"
Advertisement:

Batman: The Animated Series (or Batman: TAS), which originally aired on the Fox Kids block from 1992 to 1995, is one of the most popular and groundbreaking series in Western Animation. Towards the end, it was given a minor Retool into The Adventures of Batman & Robin, which promoted the latter hero from recurring role to regular star. A more noticeable retool occurred in 1997, where a Channel Hop and an uncancellation order led to The WB's The New Batman Adventures (also known as Batman: Gotham Knights). This retool streamlined the character designs to better match those of Superman: The Animated Series (which it aired alongside as The New Batman/Superman Adventures), allowing for the inevitable Bat Family Crossovers.

As the title suggests, the series is an animated adaptation of the adventures of the popular comic book character Batman. It drew heavily from the Denny O'Neil/Neal Adams era in the 70s and the live-action films directed by Tim Burton (although some of the latter's baggage, such as the mutated version of the Penguin, caused them some problems). The often-minimalist look of the show was largely influenced by the 1940s Superman Theatrical Cartoons, with character designs resembling those of Jack Kirby, Chester Gould, and Alex Toth. The resulting product, revolutionary for its time, was dubbed "dark deco"; it was also the result of co-producer Eric Radomski's standing order to the animators that all backgrounds be drawn with light colors on black paper (instead of dark colors on white paper, as is the industry standard) to ensure that the artwork stayed as dark as possible. Head producer Bruce Timm — who also took on other roles — carried his design style over into other shows, thus making Batman: The Animated Series the first entry in the fully-realized canon known as the DC Animated Universe.

Batman: TAS's brief venture into primetimenote It aired Sunday nights against 60 Minutes and got annihilated in the ratings showed off its well-known edgier themes, pushing the limits of what had been acceptable in Western animation (notably, sparse application of The Hit Flash, use of Censor Decoys, and overt use of realistic — if unlikely — guns, rather than dubious stand-ins).

Most of the episodes took place entirely in Gotham City, although Batman and Robin occasionally ventured to other cities and even other countries. Besides the familiar villains, this series introduced other characters from the comics, such as Ra's al-Ghul, to the television audience. It even introduced a new character, Harley Quinn, who proved to be so popular that she eventually made her way into the comics. The series also marked the first major exposure of Two-Face outside of the comics, and its revised origin for Mr. Freeze soon became the definitive version of that story.

The new designs in the second series, The New Batman Adventures, notably restored the Penguin to the comics version and emphasized Poison Ivy's plant-like nature. Since The WB's broadcast standards were more relaxed than FOX's, the producers were allowed to use more action and violence and somewhat stronger language than before. The status quo of this show was close to the comics of its time, as Batman was partnered with a younger Robin named Tim Drake, although Tim's origin in the show was taken from the character of Jason Todd, and Dick Grayson was the independent hero Nightwing due to a falling out occurring during the interim between the two series. Batgirl, who only had three appearances in the original series, became a recurring character and Batman's primary assistant.

The series also had an official tie-in comic, The Batman Adventures, which also received critical and financial success (most notably, the Eisner-Award-winning Mad Love, which detailed Harley Quinn's origin and was later adapted as an episode of the TV series). Harley & Ivy was another tie-in miniseries released in 2004 and based around Harley Quinn and Poison Ivy. Then there is also the one-shot Batgirl Adventures from 1997, featuring Batgirl, Harley Quinn and Poison Ivy, in the style of The New Batman Adventures.

Four completely different Licensed Games based on the series were released in 1995 for the Super Nintendo, Sega Genesis, Sega CD, and Game Gear, all titled The Adventures of Batman and Robin. Also, while it's not officially part of the DC Animated Universe, the 2009 video game Batman: Arkham Asylum is (in some ways) considered a Darker and Edgier spiritual successor; Paul Dini returned to write the script, while Kevin Conroy, Mark Hamill, and Arleen Sorkin (Harley Quinn) reprised their characters from the original series. The game was so popular it led to two sequels and a prequel, respectively Batman: Arkham City, Batman: Arkham Knight and Batman: Arkham Origins.

This show now has a rough episode guide (help is needed) and a Best Episode Crowner.

Example of:
See the Invisible

Alternative Title(s): The New Batman Adventures, The Adventures Of Batman And Robin