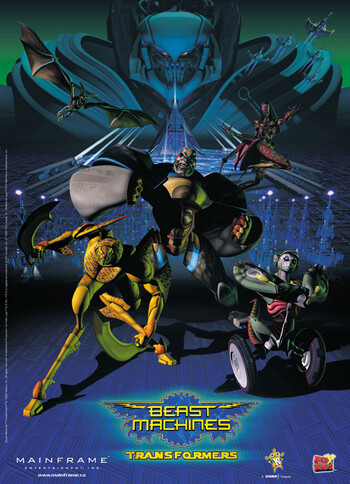 It's an evolution revolution!
Cheetor: So what are we? Robots or animals?
Optimus: Both... and neither.
Blackarachnia: Well, that sure clears it up.
Advertisement:

Beast Machines was the followup cartoon and toyline to Beast Wars; like its predecessor, it was animated entirely in CGI by Mainframe Entertainment but featured a massive change to the production and writing staff, and went from being in syndication to airing on Fox Kids in the US (it remained in Canada on YTV). It begins a new story with the characters of Beast Wars but in general is not considered a continuous storyline.

The story opens with Optimus Primal in his original Beast Wars body, awakening on Cybertron to find the planet deserted and himself being pursued by Vehicons, a strange race of sparkless Transformers under the control of Megatron, who, as it's further revealed, managed to free himself from the underside of the Autobot shuttle he was tied to, somehow return earlier than the Maximals and in the interim conquer Cybertron by ripping the sparks from the entire population and converting their bodies into his Vehicon armies. Unable to transform, Optimus runs, and manages to find some of his fellow surviving Maximals. Deep beneath the surface of Cybertron, they manage to find the Oracle supercomputer, which reformats them into 'technorganic' beings, a perfect blend of biological and technological parts. From then on, they embark on a mission to restore organic life to Cybertron and bring down Megatron.

The tone and feel of the story were substantially different to Beast Wars. Where Wars followed small groups of Maximals and Predacons through a sometimes serious, sometimes tongue-in-cheek (and sometimes both) battle on prehistoric Earth, Machines took a small group of severely outnumbered Maximals who were forced to rely on stealth and guerilla warfare. Noted Transformers comic writer Simon Furman has complained that Beast Machines was 'too dark' for a children's cartoon. And when you see some of Simon Furman's work... too dark for him is impressive.

Several items deserve particular noting. The CGI was top-notch, arguably even better than the already impressive stuff from the end of Beast Wars, and it still holds up today, although the heavily stylized take on the design was not for everyone. And while Beast Wars provided the concept, this show is an even larger source of information about the origin and properties of sparks, the soul of a Transformer.

When it aired, it had the strongest continuity of any cartoon ever shown in America or Canada. It also brought the animated Generation 1 continuity to an end, though it would continue in comic book form.

So far, this show is the only Transformers cartoon to take place entirely on Cybertron, and not to feature any humans or human ancestors, with the exception of one very brief flashback.

Beast Machines tried to tackle such concepts as loyalty, individuality, the merits of freedom vs. chaos, and the challenges of living in an increasingly technological society. This over-ambitious aim, coupled with the Continuity Lockout and the radical departure in tone from its predecessor, as well as some massive departure from the Beast Wars's characterizations in some cases, turned this show into one of the most hated Transformers incarnations of all time when it aired; the sheer backlash over it at the time led to Hasbro scrapping a planned Sequel Series named Transtech in favor of dubbing Transformers: Robots in Disguise. However, with the subsequent release of the (generally lower-quality) Unicron Trilogy as well as readier access to Japanese post-G1 series, coupled with the gap from the Beast Wars continuity and new fans watching it as a work of its own; Beast Machines is now looked upon somewhat more favorably, though it's hardly universal.

The toys were a mixed bag. The Vehicons had a living machine theme, and the toys were generally pretty good, but looked nothing like the characters on screen. The Maximals aimed for a technological animal feel, but were of mixed quality and exceedingly show-inaccurate. Better quality, show-accurate toys were later released as part of the "Battle for the Spark" Beast Machines subline, and a few were held over until the Robots in Disguise line.

For a guy who has yes as his favourite and says it for most of his life, might as well make his final utterance of the world the biggest.

For a guy who has yes as his favourite and says it for most of his life, might as well make his final utterance of the world the biggest.