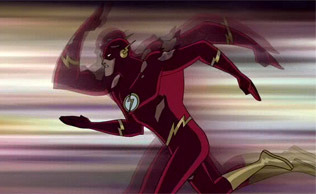 "Man, I wish I had swishy lines behind me when I did stuff."
— Narrator, a Cartoon Network Teen Titans (2003) spot
Advertisement:

In animated shows, characters moving at high speed often appear in front of a set of moving colored lines — usually blue background with yellow stripes, although depending on the impact, any color combination may be used. This is usually done because drawing a proper background moving behind the character would require drawing a large background from a camera angle which would only be seen for a split-second. The direction of the lines indicates the direction; if the lines seem to be moving towards or coming from a central point, then it is because the character is moving toward or away from the screen.

A variation of this is the Moving Punchout, where two characters are fighting and obviously moving (usually in the same direction, although sometimes towards each other), with speed stripes as the background.

Incidentally, it's useful for reducing the budget by avoiding having to draw a background, so you can reuse the footage to your heart's content. Because of this, speed lines are often used in Stock Footage with a bit of an animation bump, such as transformations in Transformers Armada or Ash catching a Pokémon/giving orders in Pokémon.

A slight variation which can appear in both Western and Japanese works is the practice of using Speed Echoes and/or Colorful Contrails in the same way.

Not to be confused with racing stripes or motion blur.