Aw, Look! They Really Do Love Each Other 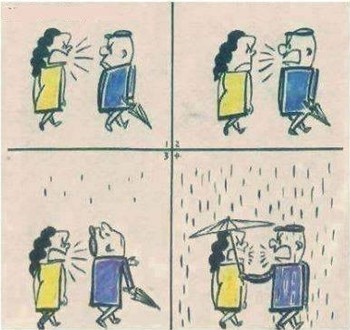 When a couple/potential couple — who spend the entirety of the show yelling at each other, insulting one another, stabbing each other in the back, etc. — have a moment when they reveal that, deep down, they really care for one another. Awwww.

Often takes place in a humorous rushing-to-your-spouse's-defense manner, where one of them angrily defends the other against the same kind of insults that they themselves like to dish out. The common line is: "Nobody insults/beats up/threatens my wife/husband/boyfriend/girlfriend but me!"

If this relation is between friends then they are Vitriolic Best Buds. If it is between siblings, then it either combines Big Brother Bully and Big Brother Instinct or is Thicker Than Water.

If the romance part comes without warning or justification, the trope may fall flat, since it comes out of nowhere when the previous context of the story makes it seem like they have nothing to love about each other. When couples don't even have these moments, you get No Accounting for Taste.

Alternative Title(s): They Really Do Love Each Other