Lets Play / Plague and Treachery on the Oregon Trail 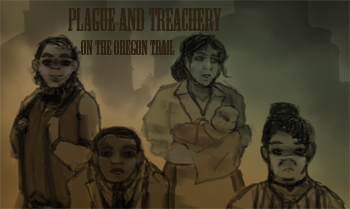 Fan art by Rondell
Susan: Did you just run over Baby?!
Cyrus: Son of a BITCH!
Advertisement:

A Let's Play of The Oregon Trail by Chewbot, who's known for also creating The Terrible Secret of Animal Crossing.

Cyrus Neckebard, a dimwitted banker, gets swept up in the patriotic dreams of the new frontier and drags his wife and children along on a family road trip to Oregon. Coming along with him is his promiscuous and unhappy wife Susan Neckebard, his piggish and hydrophobic daughter Sarah-Jane, his unusually black-skinned son Cyrus Jr. (AKA "Waffles" after the waffle incident), and Baby, a deformed infant born without a face who is of undetermined gender.

And it all goes downhill from there.

Notable for being interactive while he was making the story, including asking forum users on Something Awful to vote and choose what happened next, along with the names and personalities of the characters. Needless to say, Hilarity Ensues.