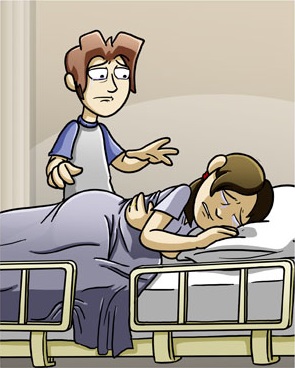 They're at a loss for words after what just happened.
Advertisement:

In television, pregnancies are more likely to end in a recognized miscarriage than they do in real life. What's a female character to do when she discovers she is pregnant? It would not be too controversial for television writers to suggest an abortion, but it would be if she were actually to have one, since Good Girls Avoid Abortion. In the end, she'll make her mind up to have the baby, if it's not what she decided ought to happen in the first place.

But it won't happen, because the plot of an ongoing series would change too much if her character had to be rewritten to include raising an infant (to say nothing of creating a new character from scratch and finding suitable child actors for it, and remember that this is a completely irrevocable change). So the writers employ the Reset Button by having her miscarry, often by falling down a flight of stairs. This trope is limited to serial works, where reverting to a status quo is more important than advancing a plot. Therefore, miscarriages are less common in non-serial works, and even when they do happen it's not a Reset Button. A common variation is for a character (usually a main character's girlfriend) to say that they've miscarried, only for The Reveal to come later that the baby was born, perfectly fine. Whether or not this gets picked up again depends on how tied the writers are to the status quo. More severe critics cite the trope as a cheap source of drama for female characters, whose most important dilemmas always end up as highlighting their femininity.

Keep in mind that this may be Truth in Television; about 15% of known pregnancies end in a miscarriage. Some studies, which use the most sophisticated and sensitive tests for pregnancy to detect it almost immediately, long before most commercial tests or the woman is likely to realize she's pregnant, indicate that 70 to 80% of successful fertilized eggs will miscarry or fail to implant on the uterine wall in the first place. Sometimes the woman also wanted an abortion — but in most cases, the woman didn't even know she was pregnant; the fertilized egg simply fails to implant (or disintegrates upon implantation) and she either has a perfectly normal period or one that is slightly late and slightly heavier than normal.

However, if a woman wants to have a child, this trope probably doesn't exist to them. If they do have a miscarriage, it's usually a Double Subversion of the Law of Inverse Fertility.

It should be noted that there are other ways of resolving a pregnancy storyline without adding a baby to the regular cast that don't involve killing off an unborn or newly born child. For example: