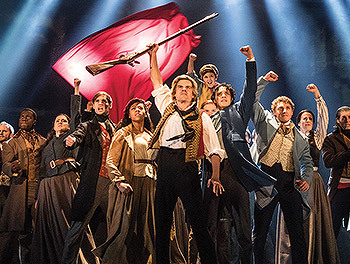 Wherever The Empire is, you'll always find La Résistance: A Ragtag Bunch of Misfits using The Power of Love and Friendship to fight against a tyrannical rule, often to help put the Government in Exile back into power. Always underdogs, they fight using guerrilla warfare and by raising the rabble of the people by revealing unpleasant truths about The Empire they've been trying to hide, causing the oppressed peoples to shake off the yokes of their tyrant rulers. Sometimes it's as simple as continuing to resist an invading regime after it attacked their homes. Usually led by a Rebel Leader and armed via Vehicular Turnabout. Expect them to be opposed by Les Collaborateurs.

Almost inevitably, The Hero will join La Resistance while the battle is already underway, and will grow to become a great champion in the fight against The Empire. After all, Hollywood usually romanticizes resistance fighters, for three reasons. The first is rooted in America's origins as rebels fighting against a tyrannical monarchy during The American Revolution. The second is likewise World War II where the conflict between the Resistance and Nazi Germany fell, as close as it ever has, to clear divisions between right and wrong, and of course, Cool People Rebel Against Authority. In most cases in history and in Real Life, resistance movements are complex and confusing events. A common mistake is to confuse resistance movements with revolutionary movements, when this is not always the case. Some resistance movements are revolutionary, seeking to install a new regime to displace the old. Revolutions, needless to say, are complex, murky and at times brutal affairs. It has led in the past to the new regime forming the new government which can be as bad or worse than the old.

Of course, people rarely like having it pointed out that these groups are terrorists from the perspective of anyone who disagrees with them and Innocent Bystanders who may get caught up in the crossfire of said conflicts. This may be deliberately ironic, perhaps inviting a "we are not so different" moment. Or, the author might simply assume that the audience will always sympathize with rebel protagonists against The Empire, therefore moral justification of the rebellion is unnecessary and the rebels can get away with whatever is expedient. This could be averted if the Evil Empire really is evil and the rebels exercise chivalry and restraint.

Alternatively, La Resistance will be utterly incompetent and little more than an annoyance until the hero gets in there and shows them how it's done. Sometimes their inner dissensions render them nearly unable to get anything done. Expect at least one member of La Resistance to be The Mole, or a homegrown Les Collaborateurs sabotaging their efforts from the inside. La Resistance may even be defeated without the assistance of its enemy: when the only thing uniting it is opposition to The Empire, they may end up clashing thanks to some point of ideology (generally portrayed as stupid) or method (generally portrayed as worthwhile).

Also alternatively, La Resistance may represent the last remnants of the reactionary or counter-revolutionary cronies of the old regime fighting against the Revolutionary Progressive Forces. Once re-installed, the Resistance "heroes" decide to Retcon the revolution and institute purges for the cause of revenge, and remind people why exactly they were toppled in the first place. In some cases, as it happened in some parts of World War II, the Resistance contains factions who want to restore the old regime and factions which want to bring a new regime, and these two factions might struggle during and after the war.

When La Resistance form the main ensemble of the show, or one of them, they'll frequently exhibit a mix of characters similar to The Squad. However, they'll usually have sneakier methods, they tend to be more morally pragmatic and ruthless than most Squads, and in series like Battlestar Galactica members becoming Shell Shocked Veterans.

Eventually, La Resistance will either die out, or grow into The Alliance as it gains power, allies, and sympathizers.

For the villainous equivalent, see The Remnant. For the opposite of La Resistance, see Les Collaborateurs. Sometimes La Resistance may not be heroes but villains, as happens in an Enemy Civil War.

Not to be confused with the First-Person Shooter series, Resistance. Or with WWE's French-Canadian Foreign Wrestling Heel Tag Team La Résistance.

The Color Underground are a group of Raydians who seek to regain control of Raydia from the control of the INKT Corporation.

The Color Underground are a group of Raydians who seek to regain control of Raydia from the control of the INKT Corporation.