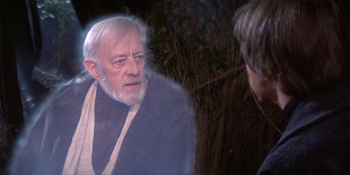 "So what I told you was true, from a certain point of view."
"You know the trope?
In storytelling it's a norm.
When a person's in trouble
manifestation of their subconscious appears in the form
Of a Dream Ghost!
Giving advice you kind of already knew."
— Dr. Akopian, Crazy Ex-Girlfriend ("Dream Ghost")

A character who can only be perceived by one or a small number of other characters. This character's purpose is most often to provide advice, act as a moral compass, or substitute for Mr. Exposition.

If there are two with opposing viewpoints, then you're dealing with Good Angel, Bad Angel instead. Ironically, the Spirit Advisor is rarely The Ghost (even if he is a genuine ghost).

If someone who can't see the Spirit Advisor learns about their existence, they will inevitably try to talk to them, leading the character who can truly see them shaking his head and saying, "He/She's over there."

A rough sci-fi equivalent is the Virtual Ghost, though it is usually visible to anyone. Can be the result of ascending to a higher plane of existence.

Compare Helpful Hallucination, who only exists within one's head, thus their entire personality and being are shaped by the person imagining them.