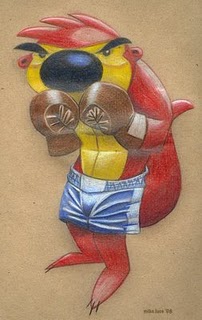 Fite! is a Furry Webcomic by Mike Luce, aka Thomas Blue

. It's the story of a boxer named Lucco, who wakes up in an unfamiliar land after a blow to the head and meets a soldier named Guz. Together, they try to find a way to get Lucco home.

The archive can be found in multiple places. The most complete version, with the final versions of all strips, is here,

includes a cast page and earlier versions of some strips.

Tropes in Fite! include: