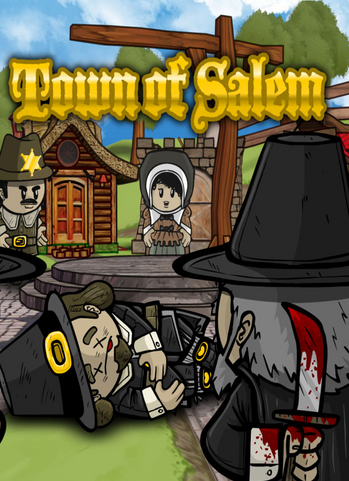 A seemingly innocent town... turns vicious at night. Only one goal... survive the Town of Salem.
— Tagline from the trailer
Advertisement:

Town of Salem is a web game developed by Blank Media Games set in an alternate reality version of the actual Town of Salem, Massachusetts during the Witch Hunts, with gameplay based on the party game Mafia

(better known under its alternate-themed version Werewolf (1997)). Three factions are trying to work their way to victory: the Mafia who are trying to kill anyone who opposes them, the Townies who are trying to root out evildoers, and the neutral parties who each have their own agenda. As of now, Town of Salem has thirty roles to play as.

The game is played in two cycles, day and night. During the day players discuss strategy with the townspeople, put together clues, or attempt to lynch someone. It starts pleasantly on Day 1, when everyone greets each other ... until the night phase, where a wolf howls to announce the day is over and everyone goes home, the music gets more intense, picks up the pace, day comes ... and the bodies begin to pile up.

Their Kickstarter can be viewed here

, it ended March 21, 2014, reaching their initial goal four days previously. They had a second one to get the game on mobile ports, Steam, and gaming consoles. It finally premiered to the public during the summer of 2014.

On June 6, 2017, a new expansion was released called Town of Salem: The Coven, introducing a new faction (the Coven), 15 new roles, and new rotating game modes.

As of November 3, 2018, Town of Salem has moved away from free-to-play, requiring all future players to purchase the game. Anyone who previously owned an account with at least one game played may still play the classic games for free.

You can sign up and purchase the game here

or on its Steam page

. The Wiki for the game is here

Tropes associated with Town of Salem as a whole:

"This Troper" died last night.
He was killed by a TVTropes binge.
We could not determine his role.