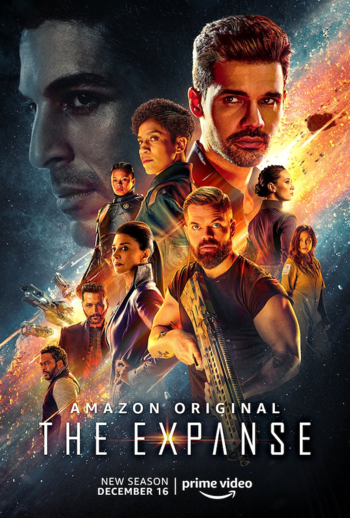 "Earth is over, Mr. Holden." note Left to right from the top: Marco Inaros, James Holden, Bobbie Draper, Naomi Nagata, Camina Drummer, Fred Johnson, Alex Kamal, Chrisjen Avasarala, Amos Burton, Clarissa Mao. Not pictured: Julie Mao and Josephus Miller.
"In the 23rd century, humans have colonized the Solar System. The UN controls Earth. Mars is an independent military power. The Inner Planets depend on the resources of the Asteroid Belt. Belters live and work in space. In the Belt, air and water are more precious than gold. For decades, tensions have been rising. Earth, Mars and the Belt are now on the brink of war. All it will take is a single spark."
— Opening Scroll, "Dulcinea"
Advertisement:

A space opera and mystery series based on the book series of the same name written by James S. A. Corey.

About two hundred years from now, humanity has colonized the Moon, Mars, and the Asteroid Belt. Ships traverse the Solar System as far out as Saturn, mostly to scavenge for ice from the planet's ring system, but closer in, they facilitate trade, commerce and transportation among the Inner Planets. The current state of affairs is tense, as Earth and Mars compete with each other for dominance in the Solar System, while the residents of the Asteroid Belt ("Belters") feel they are being exploited by the Earth and Mars ("Inners") for the resources they mine.

Amidst this cold war, Julie Mao, a political activist and the daughter of one of Earth’s biggest corporate magnates, disappears in the Belt. Her mysterious disappearance soon proves to be only the tip of a massive conspiracy, one that threatens the fate of the entire Solar System.

Has its own separate character sheet.

An Adventure Game, set before the series and featuring Camina Drummer as the main protagonist, was announced to be in works by Telltale Games, with Deck Nine also involved in the production.

"You can't take the Razorback. Catch me if you can."